Prior to 1797, most Friends in Mullica Hill were attending either Pilesgrove Monthly Meeting or Upper Greenwich Preparative Meeting (a part of Woodbury Monthly Meeting). The first proposal to establish a Friends Meeting in Mullica Hill was made in 1797 but Friends had been active at this location for some time. It is believed that the Mullica Hill Academy, a Quaker school, was formed here as early as 1720.

What these early means of education were like is hard to realize, but the slight history of Mullica school, which covers nearly two hundred years, gives us an inkling. The first building was of cedar logs with oiled paper windows, and was used from before 1720 to 1756. The entrance was at one end, the teacher’s table at the other, with long board shelves on either side, and under the windows were wooden slabs for seats. A fire place gave heat, and no small part of a boy’s education was acquired with an axe, while girls became expert carriers of live coals, which, since matches were unknown, they must bring from home. Horn books were used to teach reading, the voice for spelling, and the teacher made his own arithmetic, which the pupil copied carefully. In the absence of blackboards and slates, which came years later, sand in shallow boxes were used on which the various lessons were traced. Quill pens were rare, and the invention of slates and slate pencils greatly advanced the cause of education.

In 1756, the log cabin school was replaced with a frame building. The new building was called “Spicer’s School,” named for Jacob Spicer. Spicer was one of the town’s pioneer settlers and a member of Haddonfield Monthly Meeting. He owned nearly 1,000 acres south of Raccoon Creek in Mullica Hill and that area was known for many years as Spicerville. In Spicer’s will dated Seventh month 10th, 1779, he states: “I wish 1-1/2 acres of land for the use of a meeting house and graveyard, to the Quakers forever . . .”

The present brick meetinghouse was built in 1808 atop the hill on the land left by Jacob Spicer.

This picture of the meeting house, taken from a glass plate negative, is dated in the 1870s by the wooden fence. 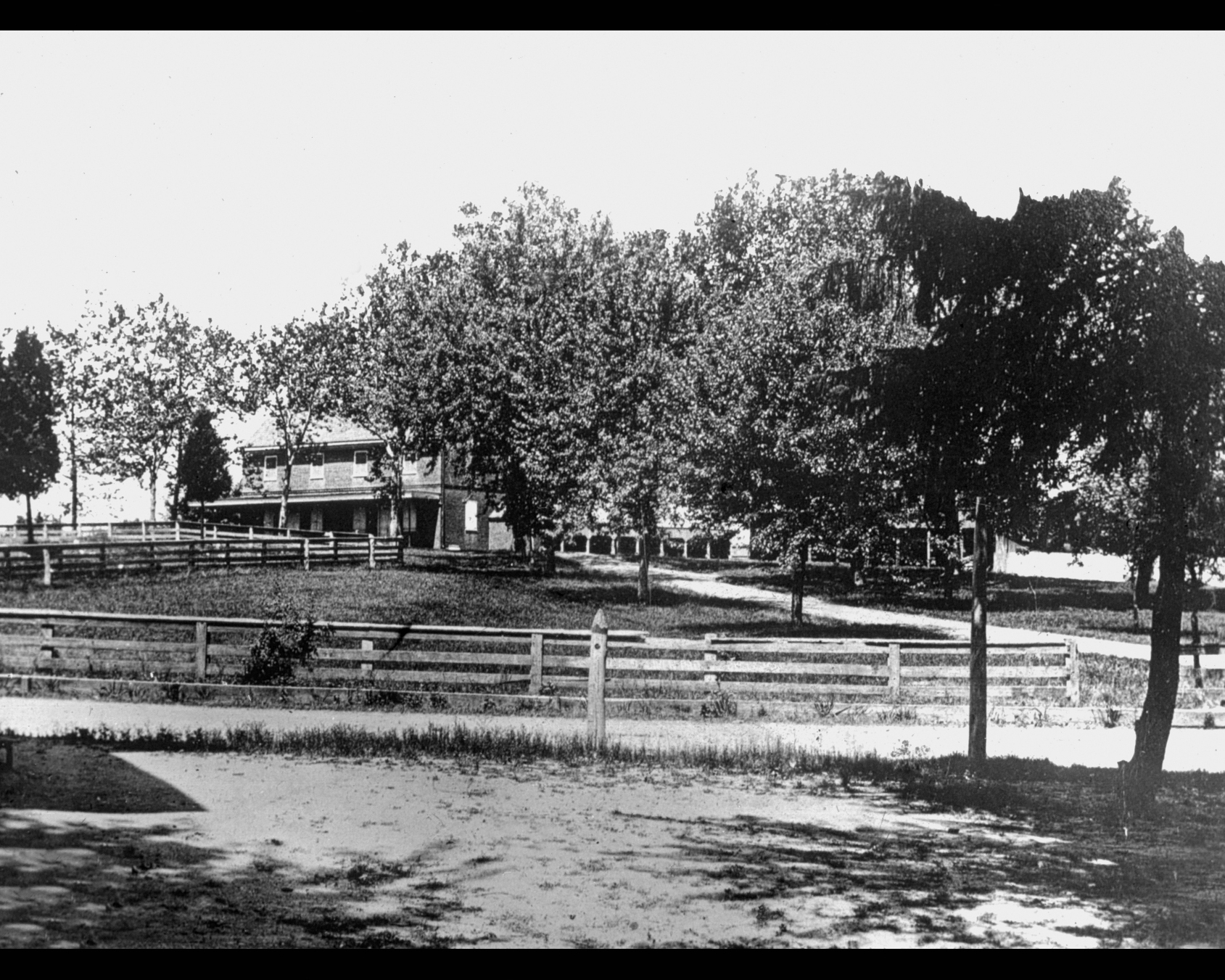 The meetinghouse with its grounds stood at the top of the proclivity sloping southward and eastward at the fork of the turnpike and another good road on the edge of town. It was a very pretty building chiefly because it was entirely harmonious in all its lines. Its especial features were as on the outside a shallow brick paved veranda across the front and ends. It was built of brick and had well shaped, many paned windows. Inside the ground floor was like this with galleries above quite low hung:

No paint had ever been used on the inner woodwork. Built of white pine it had turned to a soft grayish color that was beautiful. It was well lighted with windows above and below. The low hung galleries broke the stiffness inside and made the whole harmonious. The aisles were carpeted with plain rag carpet. At half past ten meeting began and it didn’t last more than an hour. The idea of the old time meeting was something like this: Let us sit still for a while and keep silence in the house of our Spirit while we listen to the inspeaking voice which is the voice of Truth–the voice of God heard through the inward ear. Should the visitors in God’s own house presume to do all the talking? If he speaks through you that is different. If he puts upon your mind a concern to say a few words, then you must speak but let your discourse be short and to the point. A short prayer was always in order. Meeting was often entirely silent excepting for a short prayer or recitation from Scripture. The heads of the Meeting sat on the rising pews facing the congregation. When it was time to adjourn, two old men stood up and shook hands. The meetinghouse faced the south and in warm weather doors stood open. The sunshine came in pleasantly. Sometimes other things came in, too. Robins have been known to hop solemnly up the aisle. Droning white-faced bumble bees in the spring came in, too. In the meeting house ground were very large old buttonwood trees. Their broad leaves clapped together and made a sound like gently falling rain but more solemn . . . After meeting people stood in groups or walked about under the trees, talking. They were all relatives or friends, and some of them having come a long distance to meeting, the social side was not neglected.

We believe that today’s window frames, doors, sash, hardware and most of the shutters are the original ones from 1808. Originally there was a partition between the men’s and women’s sides and a sounding board up front. The partition was removed in 1897 and balcony seats were removed some time later to make room for First-Day School (Sunday School) classrooms, and the wood work was painted white.

This photo from the 1920s shows an iron fence and the horse sheds
which have since been removed.

Woolwich Preparative Meeting became Mullica Hill Monthly Meeting with the signing of incorporation papers dated Second month 4th, 1929. The 1931 newsletter reported that the Meeting had taken part in community meetings at Thanksgiving and Christmas and felt that such occasions broadened their spiritual vision. Interfaith sharing continued in 1933 as Baptist, Methodist and Friends of Mullica Hill participated in The Gloucester County Federation of Men’s Bible Class. In 1937 it was noted that The Temperance Committee sponsored a Community Temperance Meeting in the Baptist Church. Annual newsletters during the war years reported that members were drafted for military service. In the 1942 newsletter the world situation was a deep concern as Friends were asked to use their own healing powers:

In the words of Paul we greet you, ‘This is the message that you heard from the beginning; that we should love one another. . . . For God is love and he that dwelleth in love, dwelleth in God and God in him.’ This indwelling of ‘God in us’ is the foundation of Quakerism, the ‘Inner Light’ of George Fox. We beg of you to think upon these things and to lean upon the power of God. It is up to you as Friends to discover from within yourselves the latent power which you possess, and to make use of it in every possible way for the healing of the world.

In the 1950s an annex was added to the back of the meeting house. The annex provides room for Sunday school classes and social gatherings.

The Meeting was very involved in 1981 with A Friendly Legacy depicting the 305 year history of Friends in South Jersey 1675 – 1980. This was a major exhibit and educational program sponsored by the Harrison Township Historical Society. The meetinghouse was open for visitors four days each week and five lectures were presented to the public. More than 1200 school children were shown the meetinghouse and told about the manner of Quaker worship.

C. Austin Miles, the composer of the hymn “In the Garden,” was a Methodist associated with The Grove in Pitman. Friends keep alive the memory that he would sometimes visit Mullica Hill and join with Friends in worship. “In the Garden” remains our favorite hymn.

In 1986, midweek meeting for worship began and continued to meet on Wednesday evenings until 1989. Friends focused on outreach with a variety of strategies: new signs placed at the entrance of the property, a Visitor’s Day planned to welcome newcomers, and the creation of a new pamphlet for visitors. Creative supervision for young children was also begun. It was hoped that others would feel drawn to sharing in the Quaker experience and some day consider Mullica Hill their spiritual home.

Although small in numbers, Friends at Mullica Hill have been instrumental in furthering traditional Quaker testimonies by their participation in peace, prison reform and human rights efforts. Several members have given their time and effort to improvement of the prison system and education and quality of life of the inmates while participating in regular visitations. One member implemented the first state-funded Child Assault Prevention project in Gloucester County and also organized Parents of Murdered Children for the South Jersey area. Another member was led to organize a Philadelphia Yearly Meeting and Friends General Conference visit with a South African peace activist. This member’s continuing concern for the South African situation resulted in Mullica Hill Meeting’s 1988 decision to accept responsibility for the financial and personal needs of a South African student for whom a full- tuition scholarship was offered by Glassboro State College. Cape Western Monthly Meeting in South Africa chose a female student who arrived here in 1989. She was graduated from Glassboro State College in 1992 and is using her knowledge and influence in her native country. Yet another member was an unofficial good will ambassador while promoting intervisitation between American and Soviet nationals. Our location in the trees just behind the Friends School of Mullica Hill makes our historic meeting house a convenient place for weekly worship, assemblies, and graduation ceremonies.

Mullica Hill Meeting continues to be enriched by the gifts and concerns of its members. The interfaith community service of Thanksgiving, which was begun on November 26, 1931, continues to the present time. This tradition provides not only warm memories but a real contribution to community spirit. We are a meeting of diversity similar to that spoken of by Paul in his first letter to the Corinthians 12: 4-13. God gives us many kinds of special abilities but it is the same Holy Spirit who is the source of them all. We are grateful for our individual members who develop their own particular gifts. Among our membership we find some who are examples of courage and cheerfulness, some who are generous and giving, some who are serious and concerned, some who have special knowledge to share, and some who take their testimonies and concerns to a more visible level. Each serves the meeting in his or her own unique way. There are no lesser gifts. Blessed are they who serve with willing hands and feet. They provide a base of support from which others may be freed to follow the lighted path into the wider world. For those whose influence extends beyond the meetinghouse doors, we share in the joy of their accomplishments.

Mullica Hill Friends Meeting is a Quaker meeting in Harrison Township, NJ. It is a member of Salem Quarterly Meeting and Philadelphia Yearly Meeting. We welcome visitors!